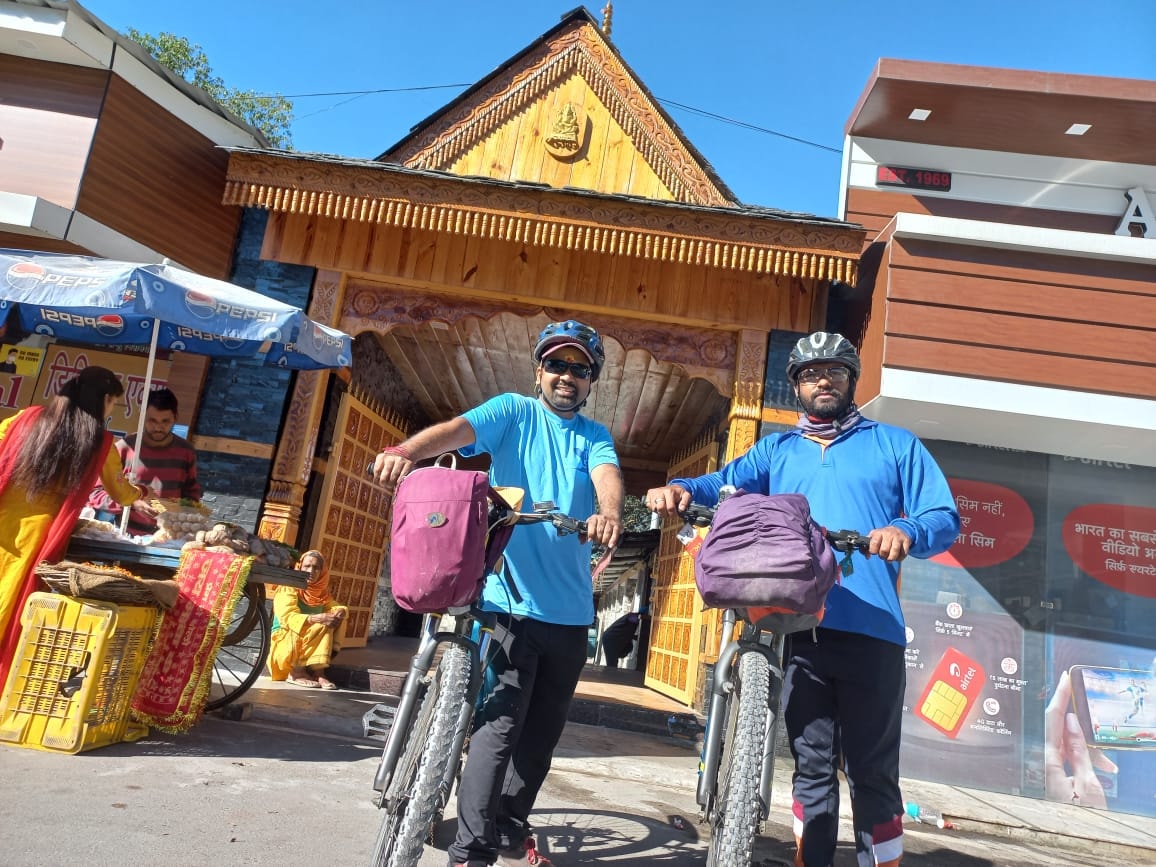 Two members of sarmang adventure tours (Anil Mohan and Aakash Rawat) completed 3 days cycling expedition of Gangotri Dham and recently opened the ancient skywalk wooden trek of Gartaang Gali in Uttarkashi district. The expedition was aimed to spread the message of eco-tourism among tourists coming from various parts of India.

They interacted with many tourists during their 3 days cycling expedition and discussed how can they contribute to eco-tourism. Some of the main highlights of the discussion were

They chose to cycle for this expedition as the cycle is one of the best methods of eco-tourism, we can save fuel, avoid polluting the air hence saving the environment. While cycling, we carry minimum stuff with us and eat local produce during the journey.

The journey started on 14 October 2021 from Clock Tower, Dehradun at 5:30 am and reached Chinalisaur via Mussoorie, Suwakholi and Moryana Top. On the first day, they travelled a total of 115 kilometres.

The next day they started from Chinyalisaur and reached Harshil via Uttarkashi, Kashi Vishwanath Mandir, Maneri, Bhatwari, Gangnani, Sukhhi Top, they cycled around 120 kilometres on the second day.

On the third day, they cycled from Harshil to Lanka bridge, trekked the recently opened Gartaang Gali and again cycled to Gangotri Dham, hence completing the journey. Last day they cycled 35 kilometres and trekked 4 kilometres.

“The idea to cycle with a message of eco-tourism came to our mind when we saw so much littering (used plastic bottles, wrappers) by the tourists on Mussoorie road during a morning cycle ride”, said Anil Mohan,  founder of Sarmang Adventure Tours.

During the journey, people appreciated them, many bikers and travellers cheered them, clicked pictures and discussed their journey and eco-tourism, many promised to adopt cycling to commute and also promised to adopt the ideas of eco-tourism especially the idea of leaving no trash behind and eating local produce rather than branded packed food.

Anil Mohan has already done this cycling expedition in 2018 solo, but for Aakash Rawat, it was the first expedition. “I am happy to complete this expedition and satisfied that we made many tourists aware of the benefit of cycling and ideas of eco-tourism. I was happy to see people listening to us seriously and promising to adopt the habits” said Aakash Rawat. On successful completion of this expedition, Aakash is aiming for Dehradun to Kedarnath cycling expedition with the same theme of eco-tourism.